The 2012 TechWomen Application is Now Open! 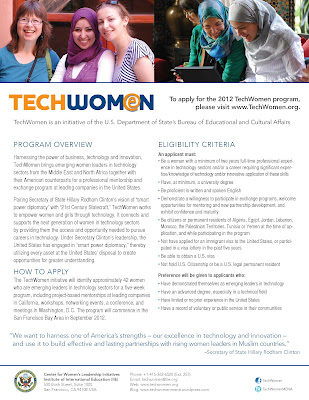 Deadline For Submission: February 15, 2012
TechWomen: Empowering Women in Technology Apply here  befoore February 15th,2012.
The TechWomen initiative will identify approximately 42 women who are emerging leaders in technology sectors for a five-week program, including project-based mentorships at leading companies in California, workshops, networking events, a conference, and meetings in Washington, D.C.

Participants will be women engaged or rising in professional careers that require significant expertise/knowledge of technology and/or innovative application of these skills, and who already are – or show promise of being – role models for others in their countries, particularly for women. “Technology” should be interpreted broadly to include – but not be limited to – the fields of science, education, and business.

An applicant must:
Preference will be given to applicants who:

The deadline for submitting TechWomen applications is 23:59 Cairo time, February 15, 2012. Finalists will be contacted via email for in-country interviews in March, April and May 2012. All applicants will be notified of the results of their applications; final decisions will be made in June 2012.
“We want to harness one ofAmerica’s strengths – our excellence in technology and innovation – and use it to build effective and lasting partnerships with rising women leaders in Muslim countries.”
- Secretary of State Hillary Rodham Clinton

About TechWomen
Harnessing the power of business, technology and innovation, TechWomen brings emerging women leaders in technology sectors from the Middle East and North Africa together with their American counterparts for a professional mentorship and exchange program at leading companies in the United States.
Pairing Secretary of State Hillary Rodham Clinton’s vision of “smart power diplomacy” with “21st Century Statecraft,” TechWomen works to empower women and girls through technology.  It connects and supports the next generation of women in technology sectors by providing them the access and opportunity needed to pursue careers in technology.

TechWomen is an initiative of the U.S. Department of State’s Bureau of Educational and Cultural Affairs (ECA). Under Secretary Clinton’s leadership, the United States has engaged in “smart power diplomacy,” thereby utilizing every asset at the United States’ disposal to create opportunities for greater understanding. A key tool in this effort is 21st Century Statecraft, which engages people across the world through the ever-changing technology mediums.

The Department of State is partnering with the Institute of International Education (IIE) and the Anita Borg Institute for Women and Technology (ABI) to implement this initiative.